Having problems with kind? This guide covers some known problems and solutions / workarounds.

It may additionally be helpful to:

If the cluster fails to create, try again with the --retain option (preserving the failed container), then run kind export logs to export the logs from the container to a temporary directory on the host.

You may have problems interacting with your kind cluster if your client(s) are skewed too far from the kind node version. Kubernetes only supports limited skew between clients and the API server.

This is a issue that frequently occurs when running kind alongside Docker For Mac.

This problem is related to a bug in docker on macOS

If you see something like the following error message:

You can check your client and server versions by running:

If you are using Mac, you can install kubectl via homebrew by running:

And overwrite the symlinks created by Docker For Mac by running:

kind is known to have issues with Kubernetes 1.13 or lower when using Docker versions:

And possibly other old versions of Docker.

With these versions you must use Kubernetes >= 1.14, or more ideally upgrade Docker instead.

kind is tested with a recent stable docker-ce release.

If you installed Docker with snap, it is likely that docker commands do not have access to $TMPDIR. This may break some kind commands which depend on using temp directories (kind build ...).

Currently a workaround for this is setting the TEMPDIR environment variable to a directory snap does have access to when working with kind. This can for example be some directory under $HOME.

Building kind's node image may fail due to running out of memory on Docker for Mac or Docker for Windows. See kind#229.

Then you may try increasing the resource limits for the Docker engine on Mac or Windows.

It is recommended that you allocate at least 8GB of RAM to build Kubernetes. 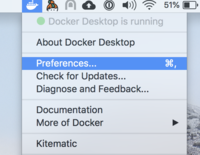 Go to the Advanced settings page, and change the settings there, see changing Docker's resource limits. 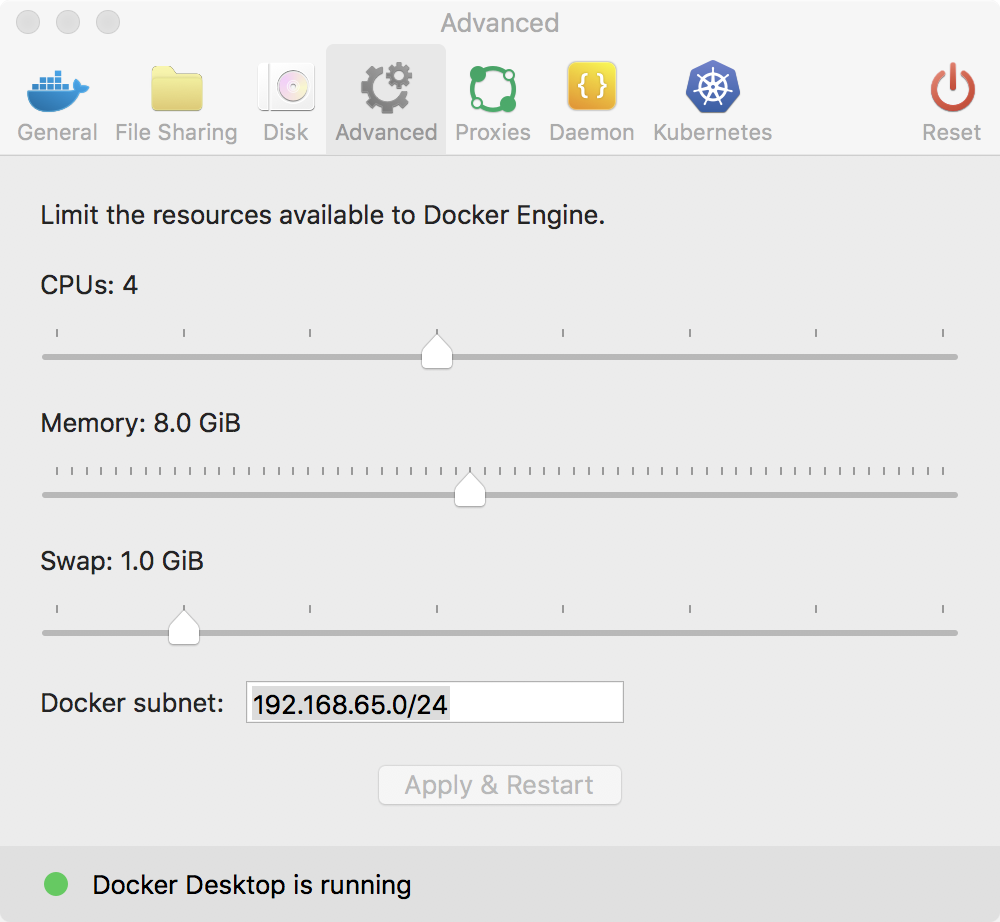 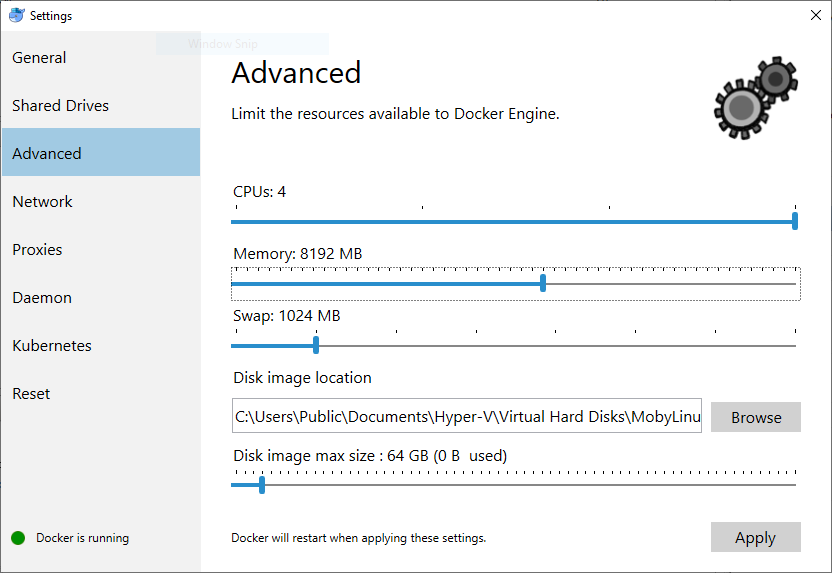 This issue is similar to a failure while building the node image. If the cluster creation process was successful but you are unable to see any Kubernetes resources running, for example:

or kubectl being unable to connect to the cluster,

Then as in kind#156, you may solve this issue by claiming back some space on your machine by removing unused data or images left by the Docker engine by running:

You can verify the issue by exporting the logs (kind export logs) and looking at the kubelet logs, which may have something like the following:

You can verify that you are hitting this issue by exporting the logs (kind export logs) and looking at the kubelet logs, which may have something like the following:

Pod errors due to “too many open files” 🔗︎

This may be caused by running out of inotify resources. Resource limits are defined by fs.inotify.max_user_watches and fs.inotify.max_user_instances system variables. For example, in Ubuntu these default to 8192 and 128 respectively, which is not enough to create a cluster with many nodes.

To increase these limits temporarily run the following commands on the host:

To make the changes persistent, edit the file /etc/sysctl.conf and add these lines:

When using kind, we assume that the user you are executing kind as has permission to use docker. If you initially ran Docker CLI commands using sudo, you may see the following error, which indicates that your ~/.docker/ directory was created with incorrect permissions due to the sudo commands.

To fix this problem, either follow the docker's docs manage docker as a non root user, or try to use sudo before your commands (if you get command not found please check this comment about sudo with kind).

Please make sure that when you use kind, you can't have "init": true in your /etc/docker/daemon.json because that will cause /sbin/init to show the following cryptic message Couldn't find an alternative telinit implementation to spawn. This has to to with /sbin/init not running as process id 1.

kind for Windows requires Linux containers. To switch between Linux and Windows containers see this page.

KIND does not currently ship pre-built images for non-amd64 architectures. In the future we may, but currently demand has been low and the cost to build has been high.

To use kind on other architectures, you need to first build a base image and then build a node image.

Run images/base/build.sh and then taking note of the built image name use kind build node-image --base-image=kindest/base:tag-i-built.

There are more details about how to do this in the Quick Start guide.

When using named KIND instances you may sometimes see your images failing to pull correctly on pods. This will usually manifest itself with the following output when doing a kubectl describe pod my-pod

If this image has been loaded onto your kind cluster using the command kind load docker-image my-custom-image then you have likely not provided the name parameter.

Re-run the command this time adding the --name my-cluster-name param:

Kubernetes does not work in the Chrome OS Linux sandbox.

If your host has AppArmor enabled you may run into moby/moby/issues/7512.

You will likely need to disable apparmor on your host or at least any profile(s) related to applications you are trying to run in KIND.

You will likely need to use Kubernetes services like NodePort or LoadBalancer to access your workloads inside the cluster via the nodes IPv6 addresses.

On some systems, creating a cluster times out with these errors in kubelet.log (device varies):

Kubernetes needs access to storage device nodes in order to do some stuff, e.g. tracking free disk space. Therefore, Kind needs to mount the necessary device nodes from the host into the control-plane container — however, it cannot always determine which device Kubernetes requires, since this varies with the host OS and filesystem. For example, the error above occurred with a BTRFS filesystem on Fedora Desktop 35.

This can be worked around by including the necessary device as an extra mount in the cluster configuration file.

To identify the device that must be listed, two variations have been observed.

On Fedora 32 firewalld moved to nftables backend by default. This seems to be incompatible with Docker, leading to KIND cluster nodes not being able to reach each other.

You can work around this by changing the FirewallBackend in the /etc/firewalld/firewalld.conf file from nftables to iptables and restarting firewalld.

Although the policy has been fixed in Fedora 34, the fix has not been backported to Fedora 33 as of June 28, 2021. Putting SELinux in permissive mode (setenforce 0) is one known workaround. This disables SELinux until the next boot. For more details, see kind#2296.

There are a couple options for getting around this limitation with Docker Desktop. You may downgrade your Docker Desktop to version 4.2.0. This was the last release to default to cgroupv1.

You may also be able to make a configuration change to your Docker Desktop settings. Starting with Docker Desktop 4.4.2 a deprecated option has been added to support those requiring cgroupv1. As noted in the 4.4.2 release notes, the setting deprecatedCgroupv1 can be set to true in settings.json. After restarting the Docker Engine, the VM used by Docker Desktop will use cgroupv1.

Docker containers cannot be executed natively on macOS and Windows, therefore Docker Desktop runs them in a Linux VM. As a consequence, the container networks are not exposed to the host and you cannot reach the kind nodes via IP. You can work around this limitation by configuring extra port mappings though.